This weekend we come to the end of our two year journey into the history of women-led activism, as our craftivist banner gets exhibited at the Walthamstow Garden Party. The banner was made by local women inspired by our project, as part of the Jo Cox Great Get Together (June 2017). 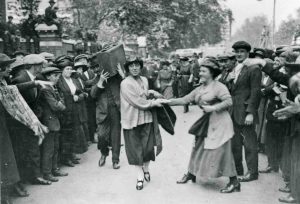 Our journey started back in summer 2015 as our volunteers investigated archives in search of women’s stories that history had forgotten. They unearthed the lesser known suffragettes, like Emma Boyce and Sybil Smith, who campaigned tirelessly for Eastend women to not only get the vote, but also fight poverty. The volunteers also brought to life women like Milly Witkop, who is often only known as Rudolph Rocker’s lover, as opposed to a powerful activist in her own right. 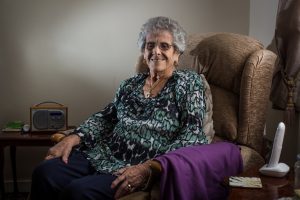 Following the archive research we began recording oral history interviews with women activists. We aimed to get 30, but ended up with 35 and could have easily done more, but ran out of time. The breadth of work, on top of commitments such as childcare and day jobs, made these women’s stories even more incredible. While many expressed gratitude to be featured amongst such esteemed companions, I personally found each and every one an inspiration.

The complete, unedited collection of interviews can be accessed via Bishopsgate Institute archives. You can hear edited versions of a selection by downloading our walking tour app. 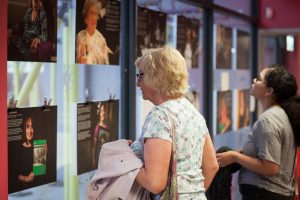 In Spring 2016 we began to curate the exhibition, which for some was the most interesting part. A lot of historical retelling comes from the top down; from academics who’ve shaped the story for us. But many of these were stories were previously untold, so open to our own interpretation. As one volunteer put it: “We were reading and constructing the past on our terms.”

The exhibition was only supposed to be a two week stretch during the E17 Art Trail, but ended up touring to six different venues, including the Walthamstow Garden Party, The Barbican, Rich Mix and on Ruby Road, in a guerilla style street-facing finale.

Thanks to our volunteers Therese Berger, Rhiannon Finamore, Ellen Harris, Sian Harrison, Veronique Jochum, Hannah Lamdin and Julia Spicer. And a very special extra thanks to Gill Scott, who helped coordinate the exhibition and events on Ruby Road.

The exhibition boards have been donated to two schools (one set each) in Stratford (Sarah Bonnel Girls School) and Walthamstow (Walthamstow School for Girls). 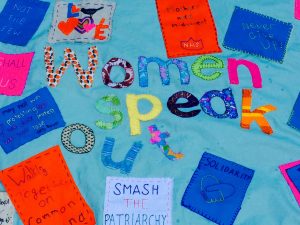 As for the banner – out this weekend in the Community Marquee at Walthamstow Garden Party – that is being homed at St Hilda’s East, and used for events run by the Boundary Women’s Group

So for now that brings the project to an end. There is however so much more women’s history out there. We didn’t even touch on lesbian, bisexual and transgender activism, and there are some incredible women disability activists, such as Sisters of Frida. I hope one day we can get the funding to come back to their stories and add to this inspirational collection.

Added thanks to our steering group Sondhya Gupta, Sarah Jackson, Janet Bowstead and Julia Slay for their help and advice throughout the project